What is CBG, and How is it Different to CBD? 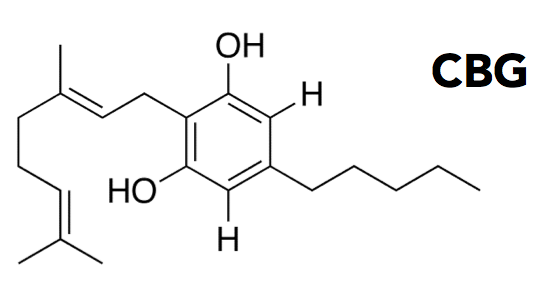 By now, you’re probably familiar with CBD, THC, and their many uses. But what about CBG – the latest compound causing a stir in the wellness world? It’s not a typo; CBG is another powerful part of the cannabis plant and, like CBD, it’s believed to deliver a host of benefits.

But, while they may sound similar, there are some key differences between CBG and CBD. Here, we break them down to reveal why CBG is garnering so much interest…

First, what is CBG?

Let’s dissect the cannabis plant. As it’s growing, it’s rich in CBGA (cannabigerolic acid), which is the acidic form of CBG, also known as cannabigerol. As the plant matures, much of the CBGA converts into tetrahydrocannabinolic acid (THCA), cannabidiolic acid (CBDA), and cannabichromenic acid (CBCA). These are the precursors to THC, CBD and CBC.

However, there is a small amount of CBGA that doesn’t get converted into these three precursors, instead becoming CBG through a process called decarboxylation. Due to the tiny ratio of CBG, the compound is notoriously tricky to extract. But, manage to procure it, and you’ll enjoy one of nature’s most covetable supplements. In fact, CBG is so elusive and expensive to extract, it’s often called ‘The Rolls-Royce of Cannabinoids’. Its other nickname? ‘The Mother of Cannabinoids’, dubbed so because it brings a multitude of cannabinoids to life.

CBD vs. CBG: what are the differences?

1. The clever ways CBD and CBG are produced

From the moment the cannabis plant is harvested, CBG and CBD are different but, in some ways, almost the same, simply because of how they are formed. Both CBD and THC start out as CBG. That said, some full-spectrum CBD products contain minute traces of CBG, where the compound hasn’t yet converted into cannabidiol.

2. The amount of CBD and CBG available

Because large quantities of CBG are converted into CBD, the latter is far more abundant on the cannabis plant’s leaves, and therefore easier to extract. Often, the amount of CBG in a cannabis strain is less than 1% by weight, but experts say it is most prevalent at around six weeks into the plant’s eight-week flowering cycle.

3. Interacting with the endocannabinoid system

Like CBD, CBG is believed to interact with the endocannabinoid system; the built-in mechanism that regulates various functions and processes in the human body. However, CBG is thought to have a more direct impact on the CB1 receptors, which regulate the nervous system, and the CB2 receptors, which are closely linked to the immune system. Research on the effects CBG may have is still in its early stages, but initial studies indicate it could have analgesic, anti-inflammatory, anti-asthmatic and anti-bacterial properties.

What happens when CBD and CBG combine?

When CBD and CBG come together, they trigger something called ‘The Entourage Effect’; a phenomenon where two or more compounds combine to enhance one another’s impact on your wellbeing. Although these compounds work effectively alone, together they prove an unstoppable force, complementing each other to act on the body in different ways.

Although CBD and CBG have some similar benefits, their differences mean, combined, they offer a wider array of functions. For example, the antibacterial properties of CBG aren’t recognised in CBD, meaning the former adds to the latter’s qualities to maximise its wellness-boosting potential.

Yes. Like CBD – but unlike THC – CBG is legal in the UK. The compound is non-psychotropic, meaning it won’t induce the ‘high’ commonly associated with cannabis. In fact, some scientists say it can reduce the paranoia experienced with THC, as it activates the CB1 receptor, which helps to decrease psychoactivation.

How can I try CBG?

If you’re considering trying CBG, look to the Love CBD E-Liquid vaping range, which combines CBD and CBG to recreate ‘The Entourage Effect’. There are two products in the range: Sativa and Indica, both of which contain 500mg of CBD and 100mg of CBG. As well as CBD and CBG, Sativa also includes a famous terpene profile called Pineapple Express, which is a sativa-dominant profile designed to bring about an uplifting effect – which makes it perfect for daytime use. Indica, on the other hand, contains an indica-dominant terpene profile called Banana Kush in addition to CBD and CBG. This legendary Californian indica strain is renowned for it’s relaxing, soothing properties, which makes it ideally suited to evening use.

When these distinct terpene profiles are combined with CBD and CBG they make for an impressive combination which highlights the potential of the Entourage Effect, and will give you benefits both day and night.